The Number One Chief Rocka

I make no bones about it, I grew up dirt poor. Not only that but in an age when some of the most ground breaking sneakers came out. These two facts were not what a teenager wanted to stuck in the middle of. Despite the circumstances I found myself in I fell hard for some sneakers and the love stays with me to this day.

I can honestly say I was never jealous or envious even of the kids at school or at football who rocked some of these. It just wasn't in my nature. If anything I was in silent awe and admiration.

To a degree I'm still poor, but that depends on how you view life. Safe to say I don't have cash money to


I got some inspiration when reading a few Complex features from the likes of Frank The Butcher, Gary Warnett and even Diggy Simmonds. I got nothing but respect for Frank, he's a heavyweight in the game and an all round good dude. I was put onto Gary by a good buddy in NJ, and his opinion and thoughts are definitely growing on me. I'm only an E-quantaince with these guys at best and that's ok, I love celeb stalking. And as for Diggy, he's maturing at a fast rate and I gotta hand it to him he has shown some pretty good taste.

So I wanted to compile my own list of favourites. Course I already had it in my head, but I wanted to share. It won't be featuring on Complex any time soon, because really I'm not even considered a sneaker head. Not in the most common use of the term anyway. I don't obssess, camp out or spend hundreds of dollars / pounds on rarities, retros and re-releases. Having said that, I would if I could, so not sure what that says really but enough of that.
My list contains pretty much all my favourites to date. From when I actually started to give a crap and up to the present day. I hope there are some surprises in there for you. Some of these I have had the pleasure of owning, some I've only dreamed about having. And I'll give one honorable mention to the only ever pair I regret having had and lost (and I won't get into the sad fact that I'm not the same size as Danny Boy who left his AJ3s behind after the London gig).

I still enjoy the hunt no matter what. Hours of web browsing, window shopping and just paying my respects when I see these being worn by some lucky jerk.
I got my photos ready, some thoughts in my head, and 'Bobo Meets Rhettmatic the Mixtape' playing on iTunes. Let's do this.


I remember seeing these in both this and the green camo colourway at school in the early 90s. They were way too bad ass for me at the time, but I knew they were something else and never to be matched again. Heavy as lead and short lived if I remember correctly.


#14
Like the Troop, these were for the Gs. I played football in a town called Hitchin and only the hard rocks wore these. It was inconceivable that a skinny lil white kid like me would be sporting these. I loved them for the attitude and the red leather really stood out. Real street shit from round my way.


#13
I remember these originally dropping and who didn't love Andre Agassi? He brought colour, style and a shit load of hair to tennis and it was never the same after him. Meaning it's boring now. Fact. I did own these recently, but just didn't manage to get comfortable with them. Maybe they are best worn on the court. Love the orange plastic hang tag though.


#12
The 90s were about Wallabees and Kickers, and those damn leather lace tag things. The thing to do was rock as many tags as you could on your shoes or school bag. Kids were boosting them from the shoe stores on the regular. It took so long for the staff to work out just to remove the tags from the display shoes. Ya dummies! I had an aqua blue suede pair of Clarks Wallabees but I will admit to fiending hard for a pair of official Wu Wear Wallabees. Think my brother had a pair, the (Old Dirty) bastard.

The Wallabee isn't a sneaker, so I am cheating and adding the Grant Hill. I had a pair and don't recall these being all that comfortable but the patent leather band and big Fila logo make it a worthy entry. These really stood out. I don't remember where I bought these or what happened to them. Damn you teen years, alcohol and weed. Oh the things this (previously) wasted mind could have done.

#11
I never had a pair of these but know my youngest brother has had a few for sure. All white is the cleanest look, though there have been other colourways. Even now just looking at these makes me think Nike just went crazy. A I R. No shit, look at the bubble unit from the front to the back. Loco.

#10
I found a pair of these at TK Maxx for under twenty quid and had to have them. From the fur on the toe box and inner lining to the grass photographic print on the side and innersole. Three pairs of laces too. The aesthetic was all over the place, but these shoes were incredibly wearable and comfortable. Price, bizarre looks and comfort. Decent cop.

#9
A buddy had these at school and I think I spent every day drooling over how these popped. The OG colourway can't be beat. I've had many chances to own these, but the damn shoe and my foot just do not agree. I find these really very narrow and impossible to half or full size up to any possible way of wearing them. I could look at them all day though, still. Nike Air was the big dog and then the Torsion unit came outta nowhere and was the talk of the playground for a long time.

#8
Everyone loves the Infrared, I know that. I managed to cop a re-release this past year. I can tell you they didn't make me feel half as good as having a pair of the AM90s back in the day. The colours of the time were the Green / Grey and Purple / Pink / Grey versions. I wasn't feeling the green as everyone was rocking them, so I went for the women's colourway. To my dismay I can't find any photos of the colour anywhere. Only one other sneaker can match this for comfort, and it's yet to come in the list.

#7
When Nike dropped the brand new 180 air unit I went nuts. I don't know why this hasn't been used more. Sure the Barkleys did it more than justice but really that's it. It is a running shoe for sure but every summer I wish I had these to rock with shorts. OG colourway only.

#6
From the tongue to the soles, these were mesmerizing. Not my favourite version of the Jays but a close friend of mine had these and although I never thought of them as a really wearable sneaker, I totally loved the futuristic look and the sick suede. Black and Fire Red only please. Another pair I wouldn't actually buy to wear but I'd happily keep on the mantle.

#5
Having never had a pair of New Balance before, a good friend and NB lover said I needed to change that. I saw these at Crooked Tongues on sale for like thirty pounds and thought that was fair to give them a try. Worst case I could wear them to work out in or something. Guess what, despite the pink laces and a far sportier look than I'm used to, I love these. They are a great mix of materials, comfortable and I can wear them to the office and even mow the lawn in them. They still turn heads whenever they see daylight. Practical and stylish.

#4
I'd like to think the reason for the AM1's inclusion is obvious. Just look at them. OG colourways of Blue or Red can't be beat. The only sneaker more comfortable than the AM90. Love the lower profile and all round cleanness of them. I had a pair of the recent ACG pack in Blue (copycat OG) and the canvas toe box was the only thing that disappointed me. If I wasn't walking around London five days a week and collecting all types of dirt and grime on my sneaks then these would have been every dayers. 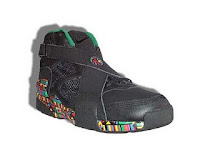 Something of pure beauty and complete insanity all rolled into one. Somehow I managed to have a pair of these and even though I looked like I was wearing moon boots and on crack I adored them. Partly because I got them from my Dad, and partly because I got them on a trip to the USA. I don't know for sure that I was the first to rock them on this island but neither do you so I'm gonna say I was. The Peace Edition deserves three photos. So rad.
﻿﻿﻿
﻿﻿


#2
Some of you who know me might find this odd because you know I love these. With every re-release and retro version I get a semi and can't stop thinking about them. I spent some crazy money on a pair of the retro White / Fire Red a good few years back and wore them until the soles came away from the leather. Since then they've dropped in a few decent colours and materials (3M, Suede, Patent) but the clincher for me this time was the icy blue soles that won't turn yellow with age. I had to have them. Black w/23. Perfection.

#1
Numero Uno on my list. Brand loyalty comes into it a bit, but really they are just all rounders. They tick every box. They are classic and yet still sick looking, made with quality leather that melts to your exact foot shape with time, affordable, sturdy, comfortable, wearable in all situations. I got married in a fresh never worn before pair. What other sneaker can you rock in a made to measure three piece black suit in Las Vegas? I never felt more bad ass and dapper at the same time. And let the records show so did Wifey in a pair of brand new white Vans Vault Leather perfed slip ons to go with her wedding dress. We killed the strip.

My buddy copped these for me in the USA and shipped them over. The anticipation for me was like a junky about to get his next fix. I was jonesin' like crazy. When I got them I desperately wanted to rock them. One thing I hadn't counted on, the Campus 80 is a terrible sneaker. They felt so uncomfortable on and I think I built up the whole situation so much that I couldn't bear to have them and not be able to wear them. Foolishly I sold them before I could clear my head and let my emotions settle. Gutted. The suede was sick, the logo and colours On Point. Damn I miss these.

I want to thank you for sitting through this and sharing my memories. I've listened to Bobo Meets Rhettmatic, Gang Starr and Public Enemy whilst making this post. After the initial CypressJunkies vibe it felt right to jam East Coast hip hop whilst talking sneakers. Weird.
Even with all the ideas already thought up this was harder than I imagined. And I had to cheat to keep it at only fifteen choices, actually using sixteen. So sue me, I already said I got no money. And don't even think about taking my sneaks. Peace.