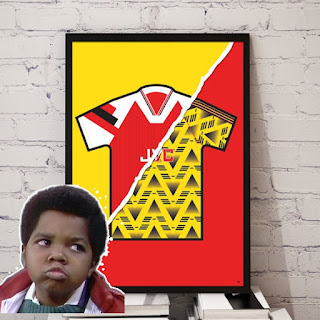 
Mark Johnson has released a series of limited prints showcasing some of the most iconic English club kits from the eighties, nineties and early noughties. A time when the kits were baggy and loud, a perfect example being the Arsenal away shirt dubbed the bruised banana. It's a very pleasing trip down memory lane regardless of what team you support.

There are so many jokes and memes about being an Arsenal fan I wouldn't even know where to begin. The fans appear to be divided, Wenger In or Wenger Out? I wonder how much is the media sensationalising the views of a minority of dissenters, but it's something Arsenal TV is only exacerbating to be honest. 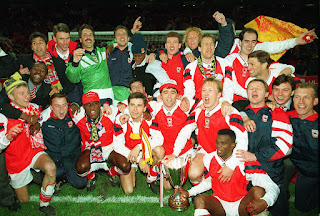 Still, this isnt about the club itself, it's about this quite brilliant handmade piece of nostalgia that harks back to happier times. A time when the Arsenal were the first team to win the English domestic cup double, and the first club to bring back a European trophy since the English league was banned from Europe (above).

I can't imagine these will last long and with no word on restocks, you'd better get your favourite snapped up before it's too late.