The Shoes That Saved Christmas 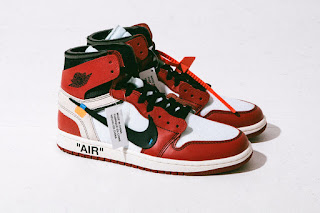 “We were enamored with Air Jordans. Michael Jordan was larger than life — he was Superman to me. My entire design background and ethos came from the ‘90s.” - Virgil Abloh

Collaborations come and go, and their memory barely lasts beyond the release date, however the hype for 'The Ten' collection was almost inescapable and genuinely felt like something special was going down. For fans of Nike and Virgil Abloh, this collaboration will continue to be discussed until the end of the year at least, and likely will be eulogised in many 'Best Of 2017' polls and publications cementing it's place in sneaker history.

'The Ten' consisted of the following styles - Air Jordan 1, Blazer, Air Presto, Air Max 90, HyperDunk, Zoom VaporFly, VaporMax, Air Force 1 and Air Max 97. Some classics and some new kids on the block. Initially this didn't interest me at all, but the more background I saw and read around the process of picking these styles and remastering them (some have called them deconstructed) I couldn't pass up the chance to see them for myself.

In order to do so I visited the pop up store for END clothing after having won the raffle for a pair of the Air Jordan 1. Before collecting the shoes I looked at the collection on display and was astonished by the work done. All were familiar and yet completely different from their original blueprints. Most surprising to me were the Prestos. I considered them the most wearable and though not a fan previously I was smitten. 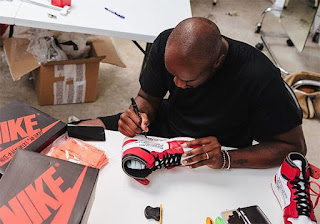 But I was there for the Jordans, and speaking on the remarkable design Abloh explained “The Jordan 1 was done in one design session. I work in a very like dream-like state. I see it, and it’s done.” On reading how they came to be I was astonished, and entirely convinced it was true when holding them in my hand. From the many different materials used to the hidden references and minute details these were transformed into an ethereal piece of art. Seeing staff wearing them made me feel a little uncomfortable if I'm honest, but then that's what they're for, right? 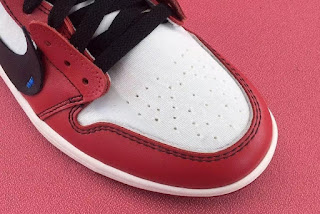 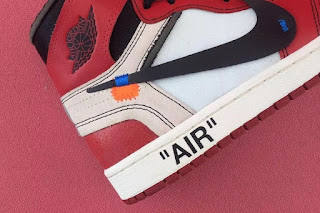 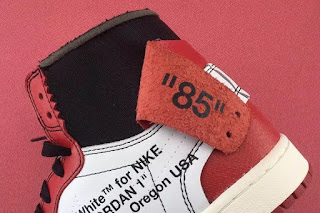 I always knew I'd be buying these to sell and retail for the shoes was a reasonable (considering) £160 and the resell was already anywhere up to ten times that on eBay. I'm not against resellers, if I miss out so be it. If I really wanted something I accept I'd have to fork up the going rate, and that hasn't happened for quite some time. That's down to simple things like maturing, having a family and priorities changing. These kinds of items do tend to regain value long down the road but I'm not in that game. I was only in this to save Christmas.

Fortune favoured me in winning the raffle, as it had blighted me with an expensive MOT and a couple other unforeseen expenses in the previous month. I hadn't realised how serious things had gotten financially but there was the very real chance that Christmas would have to be severely low key this year. So I had the opportunity to flip these quickly but for a price I could live with and that would cover the costs of the kids' main presents.

It went as smoothly as I could have wished. In the days after posting the shoes to the buyer I was sweating a bit, having recently been scammed on eBay for a KAWS Companion but once delivered I could breathe again. They may not be everyone's cup of tea however the shoe did win the coveted 2017 Footwear News Achievement Awards “Shoe of the Year”, and the resell value remains at around the £1000+ mark. And yet sneaker heads and street wear aficionados are already onto the next exclusive drop, the next raffle and chance to buy a piece of what they hope will be history.

Not me, I happened upon something extraordinary and am still experiencing relief and joy at the outcome. It was a modern day Christmas miracle.