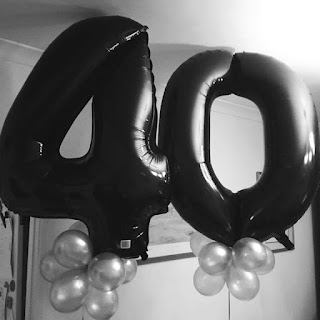 I've had quite a remarkable year truth be told. Experienced a few firsts as well as some personal achievements. I'm most proud that I have been able to share the majority of these things with the people I love. I finished the year by turning the grand old age of forty. More on that later. I've procrastinated because I wasn't sure of which moments to look back on, but here we go. I've set it out in as chronological an order as possible with my deteriorating memory, and the help of Google calendar.

I started the year by seeing what turned out to be my favourite gig of 2015, DJ Shadow and Cut Chemist playing the original vinyl owned by Afrika Bambaataa, the Renegades of Rhythm tour. Seeing two of the World's best turntablists using actual records most of which had their very first spin by a legend. It was something of an audio and visual wet dream. You could feel what this tour meant to the DJs, what it represented musically and the historical significance in the air. Truly a gift to have witnessed it first hand.

No more than a month later I would meet two of the most skilled in their artform, generous, down to Earth and not forgetting stylish men to grace the turntables. I reached out having discovered the mix he did for the now establish West Coast label Born X Raised. (listen here) I knew he was the real deal 03:15 minutes into the mix when Latin Lingo started playing. From then I did my homework and got listening to everything I could find by DJ Excel. As an unexpected bonus I got to know about another guy, close friend to Excel and fellow member of the infamous Skratch Makaniks Crew DJ Impulse. These guys' have real pedigree and their knowledge of music and ability to rock the crowd is beyond compare. I witnessed this first hand when Excel came to London to play at Libertine. The guys invited myself and my man Ricky T to hang out and enjoy a night I won't soon forget. I was buzzing by the time Excel played Still Fly by Big Tymers. Not drunk, ok obviously drunk, but more than that it was like the party I'd been missing out on all my life. I can't thank these guys enough and look forward to spending time with them again.

In April I was a guest at the Puma x Alife event thrown by the good people at Canoe Inc. where I got to see Mobb Deep for the very first time. There were so many faces in the crowd that I recognised, all extremely influential throughout the fashion and music World. I felt a little like a fraud but this was an amazing opportunity and I grabbed the chance. Prodigy and Havoc brought Queens with them to London and rocked the stage with classic after classic. It was humbling to see these legends of Hip Hop perform.

I had an eventful May starting with a gig at the Jazz Cafe seeing Onyx. I didn't listen to anything beyond their first couple of albums, truthfully I wasn't aware they'd released a further four LPs but something told me it would be crazy to miss this rare chance of seeing them and I wasn't wrong. They tore through all the hits from Bacdafucup and All We Got Iz Us and I was surprised to realise I did actually know some singles off the other joints. The energy that Fredro Starr and Sticky Fingaz displayed was off the charts. I thought they were going to literally tear the place down when they did a verse off the title track to Judgement Night.

I finished the month with my first ever solo trip to China for work. I'd been towards the end of the year with my manager but this time I was required to go alone and it was one of those once in a blue moon times when I felt like an adult. We're fortunate to have such a great team in our office out there who took good care of me. I was personally fortunate to have some new friends that put my drunk ass in a cab at 3am after a night of whiskey and poker, ensuring I got back to the apartment in one piece. I am a big big fan of the areas I've visited in mainland China in the short time I've stayed and look forward to the next trip with real anticipation.

In July I got back in touch with mother nature via a work event in the Lake District. I missed the first of what's now been three trips with Ben McNutt and his team at Woodsmoke, but have thoroughly enjoyed the other two. There really is nothing better for the soul than sleeping under the stars, getting to know those around you and appreciating what the Earth has to offer. We've become so detached but there is a way back, and I am grateful to Ben and the team for showing us how to survive in the Lakes by making a fire, putting up a hammock and turning a pigeon inside out. There were more skills taught to us including the correct way to use a knife but you should really find out these things for yourself. And later in October I learned how to use an axe responsibly in the Ashdown Forest. I learnt my own lesson in how to get a black eye playing with a glow-in-the-dark frisbee at 1 am after a load of beers and Jamesons by the campfire too. Good times. There's no app for this kind of life experience.

I can't leave July without mentioning a breath taking first London solo show from artists Prefab77 entitled "Damned If You Do, Bored If You Don't". Held in the Hoxton Gallery, their unique style of mixed media left a marked impression on me.

In August I went on a short trip to the USA for work. I spent a total of five days/nights between Boston and LA with two colleagues that I couldn't think more highly of. Meetings on both coasts meant a lot of flying and uber rides, which meant a lot to see in a very short time. I really enjoyed Boston, there are plenty of similarities with the UK mainly weather and pub/bars I guess but the atmosphere and people were great. During a walk around downtown I happened upon a Shepard Fairy 'Obey Giant' piece on a building, as well as stopping by the infamous Bodega store. Seeing these things in the flesh is undeniably more satisfying than seeing images of them countless times online.

LA was something else entirely. We stayed in a beach house walking distance from Venice Beach which meant I got to swim in the ocean before going to work. There is almost nothing in the World I've felt more rewarding than that. The vibe of Venice was intoxicating and I'm talking about the people, bars and restaurants, not just the cannabis clinics on the boardwalk.

Whilst in LA I got a chance to visit with producer/rapper Lyle Horowitz. In person he is humble and kind and has this otherworldly aura about him. His music does so much more than just entertain, it challenges and offers an insight to the mind of someone extraordinary. He also makes great soft tacos. And I couldn't go to LA and not stop by Deer's Eye Studio, home of artists Chuey (CHUVINCI) Quintanar, Eric 'Nspired1' Gonzalez and their team Greg, Evan, Chris, Rudy, Eddy et al. The studio and it's decor is outstanding, luxurious, dark and befitting the talent within it's walls. Coincidentally I saw model Sabina Kelley and her man Nixx as Sabina had an appointment with Chuey. The guys were so welcoming and I relished the chance to being able to visit and catch up before the London Convention.

By chance I got to see the Mandela mural by David Flores on Lincoln Blvd, even from the uber it was captivating.

September started with a close out party of the summer by VNA Magazine and it's release of issue 31 with Cyrcle. There were burgers and beers at sunset and the Dougs were on hand to chat. Being in their presence after what they've accomplished to date was a little intimidating but they were as cool as it gets. The end of the month was spent at the London Tattoo Convention and hanging out at the Deer's Eye crew booth. I discovered thanks to London based jeweler and total badass Toshi Takashi that I can take Jameson shots. Every pass made of the booth meant another shot whilst seeing Chuey and Eric work their magic. I got my first look at the Jesus Skull pendant by Chuey and Room101 which I later bought as a birthday present.

And so I finish on December. Firstly I was honoured to be asked to do the intro for a fanzine by the good people at Creation. It took several attempts before I was even remotely happy with the finished piece, but I'm proud to be associated with the brand and hope to work with them on something again in the future. Seeing my words printed was a great accomplishment. The chance came off the back of having spent a year writing for lifestyle blog The Reference Council. Sadly the blog closed in December, with both the original creator and Editor thinking it had run it's course. Though I was gutted by the decision, I understood and I was grateful for the chance to write for a new audience and for the events I was invited to as part of the team.

And so I've turned forty. The anticipation of the day was overwhelming but honestly I'm taking it in my stride. I've genuinely never been happier or felt better. I read a passage in a book around the time that I felt was appropriate -

"The guy was about forty years old, right up there on a hard won plateau in the center of his life, not a dumb kid anymore, but not yet an old man either, and full of accumulated competence and confidence and capability, all wrapped up in experience."


Since getting married ten years ago and starting a family, my life has gotten progressively better with each passing year. I'm blessed with such an amazing family (including a new niece), some very close friends, good health, and a job I enjoy for a company I believe in. Inevitably there are events and people I've failed to mention but each and every encounter has been positive in my life.

My plan for 2016 is to continue with what I've been doing. My mantra has served me well, giving me priceless opportunities and experiences and made me a better human being in general. Life is about meeting people, connecting and making things happen. Here's to 2016 where I hope our paths cross and we do something special.