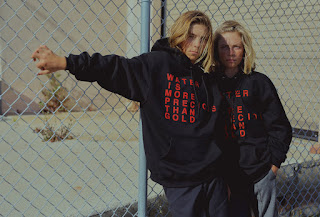 "Nothing is more important than the future generation." - Reese Cooper


Having seen a post on Hypebeast earlier today, and though I believe many if not all of my readers also check Hypebeast daily, I still felt compelled to highlight this project.


Reese Cooper® and the Flint Child Health and Development Fund have partnered to release a hoodie on May 14th. The project titled, WATER IS MORE PRECIOUS THAN GOLD, has the aim to bring the crisis in Flint, Michigan back to our attention. As of today it has been 1,112 days since the city and those in it have had access to clean drinking water. The charity’s (flintkids.org) main mission is to help fight the effects of lead poisoning in the children of Flint. Profits from this project go to the Flint Child Health and Development Fund.

The story of the water crisis is Flint, Michigan is a harrowing one and on paper looks to have been entirely avoidable. Whether it was a cost-cutting decision or an instance of environmental racism as some have claimed, the bottom line is that people have been suffering for years, and continue to be affected. Though the water quality has returned to acceptable levels as of early this year, residents are being advised to continue using bottled or filtered water until at least the year 2020.

That something like this could happen in what's arguably the greatest Country on Earth, and potentially affect a population of 100,000 people is inconceivable. If you follow the timeline of events both the State and Federal Government were woefully slow in admitting there was a problem let alone acting on it. It took two years from the start of the crisis for a State Of Emergency to be declared and for FEMA get involved. In that time it's estimated that 6,000 to 12,000 children will have been exposed to lead poisoning.

Much has been done and millions of dollars spent on helping the residents affected by the crisis, yet the long term effects on people's health go far beyond just replacing the pipes and repairing the infrastructure. This is where communities, locally, nationally and even globally can make a difference. Whilst I admit to being cynical about fashion brands making political and social statements, this project is a little bit different.

This is the work of London designer Reese Cooper, who is donating all profits directly to the charity. I'd never heard of him if I'm honest so after a quick Google search I found an interview via OysterMag. It's gives just a small insight into his character, but the below quote gives credence to the intent behind the project.


"I believe in community. I believe in teaching as much as learning. It is a major part of my thought process when designing or working in any medium that we learn from others and inspire others with the work that we do. This grows a community. That being said, we have to start with the basics before we can grow.

It has been over 3 years since the people of Flint, Michigan have had access to clean drinking water. This information has circulated in and out of our news coverage. I believe it's time to bring it back into the spotlight. In one weeks time, on May 14th, @reesecoopersc is releasing a hoodie in partnership with the Flint Child Health and Development Fund. This charity helps fight the effects from the lead poisoning of Flint's water, specifically for children.

The profits of this special project go directly to this charity and directly to the kids affected by this crisis. Nothing is more important than the future generation."

As ambitious and commendable as this already is, another remarkable aspect is that Reese is not yet out of his teens and presumably not connected to the city in any way. Whilst the media focuses on the many celebrities that have donated money or bottled water, an act of this nature does more to inspire and enable those less affluent to help.

This post comes from a father who just can't comprehend what the parents of Flint must be going through. If this were to happen in my village (just 1/200 of the population of Flint) the damage caused would be irreparable. Answers to how or why this happened won't help those affected heal, but hopefully the knowledge that people from around the World care and are doing something to help might ease some of the distress.

FLINT from Charlie Gioventú on Vimeo.

If any of what I have written is factually incorrect I apologise, and strongly suggest you research for yourself if you are interested in helping. I have spent some time reading articles from various sources (CNN, Business Insider, NPR and Detroit News to name a few) which share the same basic facts and timelines, and I've tried to omit any bias or blame.