Good Morning America, How are Ya?

- July 25, 2011
This post threatens to go on and on so I will try and keep it to the point, and make the point hopefully clear. Assuming there is a point of course.

For those that don't know, I was born in the ass kicking US of A. The day before my tenth birthday I was brought to the shores of the United Kingdom along with my two younger brothers. And here I have settled, survived and even succeeded far more than could have been predicted.

During this time, it is safe to say there have been ups and downs in my personal life. Hindsight can be a bringer of peace and rest to the soul, if you allow it to be. It can also screw you over, but that's not me. If it happened in 1985, leave it in 1985. Sure, work to understand it, but move on.

A buddy of mine coined the phrase 'Shaped in America' for his company. I found great comfort in that phrase. I've asked the question before "Why after 'X' amount of years away from home am I so fiercely patriotic?". Imagine that question asked over and over again for the last 25 years. The answer always remains the same. I'm an American.

If you're not an American, you just might not understand. Often I'm told "you've lived here long enough now you must consider yourself British". No. Thank you England for putting the challenges in front of me and giving me a chance to become who I am today. And sure I may display some of your traits and habits, but don't ever get it twisted. I'm an American.

This I can say confidence and with much pride. However, I've also had to do a lot of soul searching with regards to what exactly is my identity? How have I been shaped in my time here?

Looking back I've gone through many changes. Some of which have served to nourish my soul, expand my knowledge and allow me to see things from multiple angles. I think of myself as a well rounded person. This is where this post could go on and on. But I'll keep it simple to a point. Let's go musical (no, not Cats).

Music has always been an important part of my life. As a child of the 70s how could it not be? The greatness of the 70s, 80s and 90s there for the enjoyment for those that kept an open mind as well as their ears. And (along with puberty) the music inevitably influences appearance, demeanour and attitude.

From an early age I was into Dire Straits, Queen, Rod Stewart, Paul Young, Huey Lewis and the News, The Stones, The Beatles, Van Halen, Fine Young Cannibals to name just a few (the list goes on and on and I'm sad I can't actually complete it here and now). In my teens I was listening to everything from the Rap to Reggae and all I could find in between. (incl. Ragga, Jungle, Progressive House, Acid, Techno, Dubplate, you name it). This period saw me go through drastic image changes.

It's so obvious looking back, and what amazes me is that no one else seemed to know or maybe even care, that I was in need of support. I needed help. (later drink and drugs became substitutes for this) I was struggling to get by on the little I knew. Sure, I suppose it's easy to fall back on the Teenage Fad phenomenon and shrug your shoulders and say Meh. But then you'd be just shit on the bottom of my shoe in my humble opinion. Being a father, I know it's my responsibility to be involved with my children's lives. To know what's going on in their world. Help them to find and then understand the things around them, to understand themselves, no matter how often things change.

My stand out looks usually involved my hair, and ranged from shoulder length to dreadlocks. From dying it black (red, blue, purple..) to shaving it all off. I wore waist size 36" jeans, Air Jordan knock off tees and jackets, DM 7 hole boots, marijuana leaf neck chains, Moschino shirts, a CZ earring and fake bling watch bought on the internet. Not all at once, that does paint an interesting picture for sure, but span it out over a good 10 years, from say fifteen to twenty-five. This started earlier than that, and ended probably a little later, but I'm trying not to go on.

I remember at age thirteen seeing my father, for what I believe was the last time in person, and I was wearing huge faded jeans (possible Bleu Bolt?) from Camden Market and a reggae coloured t-shirt a good three sizes too big for me. I was also the proud owner of Nike Air Raid with the 'peace' symbol on the straps.  Hardly the look of an insecure, scared, skinny white boy trying to be a man.

I remember staying with my grandfather at age eighteen and showing up in similar clothing, shoulder length black hair, fake gold pot leaf chain and demanding all the respect in the world. I couldn't have been more MTV. I don't mean that in a good way either.

With no male role models at my disposal (and driven by the desire to see my brothers grow up normal under my watch), all I had was the music in my life as an influence. It also served as an escape. Look at me, but don't see me. So my looks changed, mixed in the middle, were fun, offensive all at the same time usually. Yet they were never a true reflection of who I was.

This is not auto biography time, I may just get there some day if it's the right thing for me to do. So let's get back to the present.

At thirty-fivemy main appearance is a shaved head, beard, tattoos, almost always wearing jeans (more fitted than previously mentioned), and a leather jacket often completes the look. Add and take bits and pieces inbetween but that about sums it up. I've never been happier with my appearance and personality. Both live in harmony and show a honest reflection of who I am, who I have fought so hard to become. Hmm that's not right. I'm sure this is who I was supposed to be all along. We all have roads to travel, challenges to face. I'm no longer that frightened little boy, raising himself emotionally, hiding from the world whilst simultaneously saying "look at me and do better; be better". I see that now. I'm at peace with that. It makes sense to me. I am now that man I desperately wanted to be. Now I'm saying "be happy, be you, and still by all means do better; be better".

And the music continues to influence me. Add to the list Country, Rock & Roll, Metal, Hip Hop, Dubstep, Punk Rock, Ska...all of these have their place on my iPod and in my life. And thank you again to the people continuing to re-introduce me to the classics, and push forward the new sounds (I'm looking at you Dave!). Thank you to those that I've found strength in growing up, and continue to do so in adult life. Without you I would be half the man, and that's with rounding it up.

If I had to, I would say my love for rock and roll is strongest, and no band moves me more than Jane's Addiction. Though Stone Temple Pilots do try.

Saying that I still gotta whole lot of love (intended Led Zep and House of Pain ref there people) for hip hop. I feel a particular affiliation with the Soul Assassins family. Some eighteen years or so ago some of that Phunky Cypress Hill shit got into my blood (and lungs) and still remains. PS Have I mentioned this Thursday and House of Pain being in London? You sure? Oh ok, once or twice.

I love many bands who have lost their voice but their message lives on. Alice in Chains, Nirvana, Sublime to drop just a couple or three names.

And I will happily sing along to Willie Nelson's version of City of New Orleans and remember my Dad any with a big smile on my face (and a tear in my eye).
And that I believe is a fantastic song to finish on. Go find the lyrics so you can sing along. I'm not gonna do it all for you and if you're anything like the person I think you are you'll feel something inside no matter what your tastes are.

Having not read back through this post, I don't actually know if I got to say what was on my mind and in my heart. I expect I did, it works out that way usually. And if not I expect you'll understand where I was coming from even if I didn't get to where I was originally headed. When I first started this post, I had called it 'Identity Crisis' and wanted to use this picture to portray what this was all about - 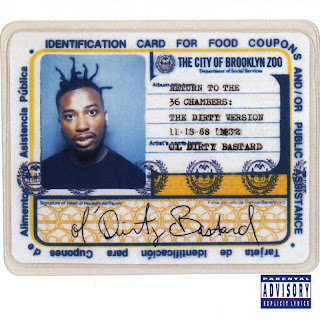 For you see, in my eyes that really was me at eighteen years old. When I picked up the album (on double vinyl no less), through the many rotations the cover might as well have been a mirror. Hand on my heart, I wanted to be Ol' Dirty Bastard. I couldn't relate to the stories he was telling, but I had a connection with him all the same. I'm not exactly likening myself to Russell Tyrone Jones, I'm just saying I can see similarities between two wounded souls, and I can vouch for how they can speak to each other.

In light of events this past weekend, I'd like to say Rest in Peace all the artists who have passed and made a positive impact on our lives. No matter what, no one can take away the feelings you have had when listening to music. Music a blessing. Embrace it. Share it. Live it.