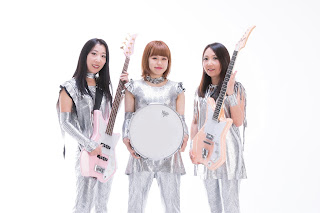 “When I finally got to see them live, I was transformed into a hysterical nine-year-old girl at a Beatles concert.” Kurt Cobain


This quote from the Nirvana front man is on every press release for Japanese Punk-Pop trio Shonen Knife that I've found online, and for very good reason. Lucky for me the band are currently on tour celebrating their 35th Anniversary, so I had the pleasure of finding out why.

I spent the week before their London date mostly on my ass with a virus and my first venture out of the house was to Dingwalls to see the group hailed by critics as the heirs of Nirvana. Sonically there is merit to this, however they offer a completely different dimension through their upbeat melodies and catchy pop lyrics. Within the first thirty seconds of their opening track I knew I was in for something totally surreal and out of this World. No amount of plays on Soundcloud prepared me for the complete and unadulterated joy I felt throughout their entire set.


“Ultimately, without using superlatives, Shonen Knife should be set up for life as ambassadors for live music.” - Clash


I'll be the first to accept I've been guilty of music snobbery and could have easily missed out on this opportunity. But I've practised letting go of unnecessary judgement, expectation and labels and have begun enjoying the music for what it is. Whilst Shonen Knife's extensive catalogue of idiosyncratic songs might not be described as life changing it unequivocally warrants a listen. The band's nineteenth studio album "Adventure" is an absolute rollercoaster of fun, with references to 70's rockers Thin Lizzy, Motorhead and Deep Purple but done unabashedly in their own legendary punk-pop fashion. I can now vouch that their live performances are a truly unmissable treat. I believe this so much that I'm booked to see them play again this coming weekend at Esquires in Bedford.

“There are two types of people: those who enjoy thrashy Japanese girl-punk, and those who have something wrong with them.” - The Independent


If you're really in need of credibility then how's about the likes of Sonic Youth, L7 and Redd Kross covering their favourite Shonen Knife songs on the tribute album ‘Every Band Has A Shonen Knife Who Loves Them’? Or the fact that they toured with Nirvana on the ‘Nevermind’ tour? Hell they even appeared on MTV’s ‘Beavis and Butthead’. It doesn't get more rock and roll than that!


Although the band (with it's various line-ups) show no signs of stopping, the 2016 UK tour is coming to an end and I am grateful for having been introduced to their 'oo-oo-ultra-eccentric-super-cult-punk-pop-band-shonen-knife' music, and excited that I get to see them one more time. You can order Adventure online through Damnably HERE.

I look forward to seeing the band on Saturday night and saying "Let's ROCK!"